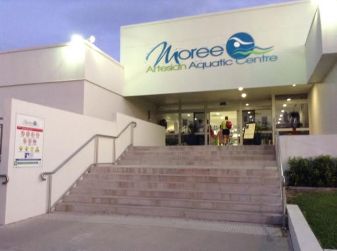 Moree is situated on the Newell Highway between the Pilliga and Chinchilla gas fields.

Visit the Moree Artesian Aquatic Centre with its many pools filled with the naturally warm water of the Great Artesian Basin. The temperature in one pool is 38 degrees and in another it is 40 degrees. The water makes your skin feel soft and smooth. The Olympic pool is reserved for laps and there are children’s pools too. A variety of accommodation is available close by.

The Moree Artesian Aquatic Centre has a chequered history. Canadian drillers sank a bore into the Great Artesian Basin at Moree in 1895. When the bore started flowing, 2,700,000 litres of hot water gushed from a depth of 951 metres flooding the nearby stores. The government constructed a pool on the site using railway sleepers and it was leased as a commercial concern and opened to the public for ‘taking the waters’. Women and children bathed two days a week and it was open to men and youths the rest of the week, except Sunday. Aboriginal people were not allowed to enter the baths.

Two hot concrete pools were built in 1913, one for men, and the other for women. An Olympic size swimming pool and grandstand were added to the Moree Baths in 1930 and by the 1960s they were well known and promoted as having curative powers.

In 1965 the ‘freedom riders’, lead by student and Aboriginal activist Charles Perkins, drove into Moree in a bus. Inspired by the ‘freedom riders’ of the American civil rights movement, a group of Sydney University students were on a fact finding mission on the living conditions of Aboriginal people in NSW country towns. They protested about segregation and discrimination at pools, clubs, picture theatres and pubs and drew public attention to the poor state of Aboriginal health, education and housing.

Moree Plains Shire Council had passed a by-law that did not permit Aboriginal people in the baths complex. The ‘freedom riders’ transported a number of children from the Aboriginal mission to the pool and blocked the entry until they were allowed in. It was a very hot day. After three hours of heated negotiations, a hostile crowd gathered, fights broke out and several arrests were made until everyone gained entry to the pool. The council then rescinded the by-law.

In 2008 the Moree Plains Shire Council planned a seven million dollar redevelopment of the baths. Many farmers wanted the council to recycle the water like most other country town pools. The Council lobbied the state government to buy the water required. The government agreed to auction a limited amount, which was supposedly water saved from the Cap & Pipe the Bores Program.

The auction of twenty-four access licences infuriated farmers who had capped and piped their bores. They and others were concerned about the management of the Great Artesian Basin and the lack of knowledge of its hydrology.

A rally held prior to the auction was attended by approximately 150 people, including several politicians opposed to the allocation of access licences. The rally participants allowed the auction to go ahead uninterrupted on the condition that the State Government monitor the impacts on pressure recovery and guarantee that the proceeds of the sale be reinvested into the Cap & Pipe the Bores Program. No further auctions were held.

The water auctioned in 2009 went to some primary producers but mostly to the newly opened Moree Artesian Aquatic Complex. The free flowing bore water goes through a heat exchange, depending on the season, and is treated with chlorine before going into the pools. The discharge initially flowed into the Gwyder River but now goes into maturation ponds before filling ski lakes at Moree Water Park, built by Moree Plains Council in 2015 and managed by Moree Water Ski Club.

See for yourself what is happening to the Great Artesian Basin then tell your friends. Protectors of country and farmers need your support.
%d bloggers like this: