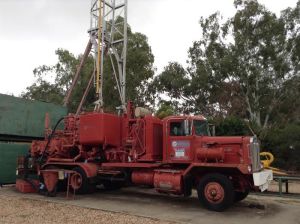 During the drought in 1900, Roma was short of water as the creek and a reservoir were inadequate. A bore was drilled to 1350 feet and water and natural gas gushed out but it took several years to know how to separate them.[1] The problem was solved by sinking another bore inside the existing bore and driving it down to the gaseous strata.

The natural gas, also called conventional gas, was extracted from a layer of sandstone above the Great Artesian Basin. It may have migrated from another strata, perhaps coal, and was trapped by an impermeable ‘cap’ rock. Drilling through the ‘cap’ rock allowed the gas to flow out naturally.

A gas plant was completed at Roma in 1906 and different prices were set for lighting and cooking. When the shops and hotels were first connected and lit up, they became a public attraction.[2] ‘It gives a perfectly white light, and most brilliant as displayed by the block burners and mantles.’

Ten days after connecting the first premises, the gas flow stopped. It was not known if it had run out, if it was blocked by an obstruction or if the casing had leaked and the gas had found another way of escape, possibly through the town water supply. Experts were called in but the supply was not restored.

As natural gas had been found deep in the earth often alongside petroleum deposits in America, a local company was formed to explore for oil in the area. In October 1908 the Roma Mineral Oil Company’s bore at Roma struck gas at 3,680 feet.[3] A strong wind blew the gas towards a wood burning steam boiler and the gas ignited. Increasing volumes of gas produced flames estimated to be 100 feet high. The iron derrick, which had held the drilling machinery in place, melted. The roar of the flames could be heard seven miles away and no one could go within sixty feet of the bore due to the intense heat. A telegram reporting the incident to the government also brought news of water and oil flowing from the bore.

People travelled to Roma to see the site. Residents asked the government to run special train excursions from Brisbane on weekends for sightseers but the government did not oblige. 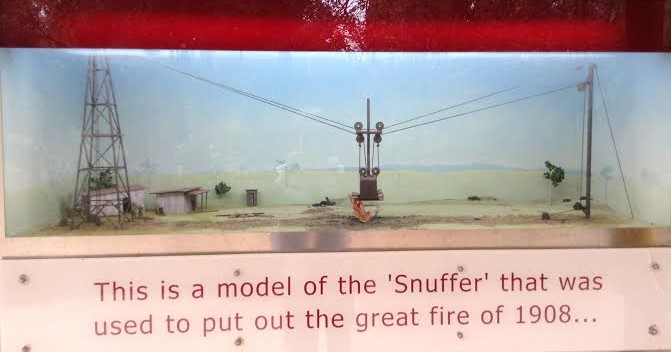 An iron hood was built, eight feet by six feet square, similar to a big iron tank without a bottom. [4] It was fitted with a valve at the top and another at the side. The top valve was attached to twenty feet of piping to act as a chimney.

A special edition of the local paper announced when the contractors were to attempt to smother the flames. Hundreds of spectators took up positions close to the bore, some sitting as close to the bore as the heat would allow. The first attempt failed and they had to return the following day. They watched the hood, suspended between a 15m high gin-pole and the rebuilt derrick, being lowered over the flames, which continued to dart out from underneath the hood. Workmen and volunteers heaped earth around the bottom of the hood forcing the flames upward. [5] The valve on the side was gradually closed and the flames appeared at the top of the twenty feet pipe.

‘A great column of flame was now shooting out of the pipe already mentioned, ascending with the air to a great height. The sight was a magnificent one, and when the darkness descended the columns of flames lighted the tops of the buildings in the town and threw a glow on the sky to the west similar to that from an immense bush fire.’

With the flames extinguished within the hood, the iron cooled allowing a pipe to be connected to the escape pipe at the side. The valve was partially opened, reducing the pressure from the chimney, allowing some gas and water to escape. The smell of kerosene permeated the air. The valve on the chimney, controlled by wires, was gradually closed to many cheers from spectators. In the ensuing darkness, they groped their way home or to the School of Arts for a celebration.

The Roma Mineral & Oil Company publicised their finding of oil and the smell of kerosene seemed to confirm it. Speculation about oil being found a bit deeper increased demand and the price of their shares.

When Roma Oil Corporation drilled their first well on Hospital Hill in 1927, they struck oil. The liquid was condensate, a crude oil, and as such could be used in motor vehicles straight from the well. A car was driven from Roma to Sydney using this fuel but the well ceased to produce in 1931. Natural gas continued to be found around Roma but no commercial quantities of oil.

When Roma’s conventional gas was finally proved to be a significant resource, a 440 kilometre gas pipeline was constructed to Brisbane in 1969. The gas was utilised domestically and supplied the hydrogen to make ammonia to produce fertiliser.

Legislation, introduced by the Queensland parliament, ensured that oil and gas exploration companies at Roma compensated landholders for any damage to improvements on properties. As oil and natural gas were found on arid western properties of thousands of acres, production did not interfere to a great extent with the running of cattle or sheep. If the drillers failed to find gas, they often found water and the farmer had a free bore. A good relationship had developed between farmers and the conventional gas industry in southwest Queensland so when coal seam gas extraction started, the farmers were not concerned.

Santos drilled a test well for coal seam gas at their Scotia Gas Field in the Bowen Basin 145 kilometres north east of Roma in 1996.[6] Commercial production began in 2002, providing gas to a Queensland government owned gas fired power station on a fifteen year contract. In 2006 Santos bought the lease for the Fairview field north of Roma. Santos drills through the Great Artesian Basin to the coal seam below to extract the gas and water. The water is reinjected back into the earth.