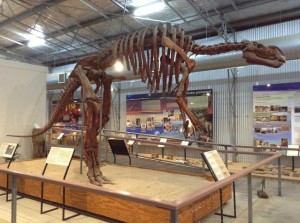 After two days of dinosaurs I thought driving out further to see more at Hughenden and Richmond may not be worth it. As we had been very impressed with everything we had seen and we had bought discounted tickets to see the lot, we decided to go.

After two hours driving I was pleased to see construction underway for a giant solar farm south of Hughenden. The Flinders Discovery Centre is worth a visit to see the display on the local wool industry, the fossil collection and a replica skeleton of Muttaburrasaurus. The light and sound show about the formation of Porcupine Gorge to the north showed how the inland see came and went numerous times and the layers of the sediments that it left behind.

We had lunch in the FJ Holden Café which not only pays homage to the FJ but also to Elvis and Coca Cola. It had good food too.

Then we drove on to Richmond to Kronosaurus Corner a marine fossil museum. First we saw a film on fossils and the original discovery of fossils and moonstones in the area. Then there are three galleries but the interconnection does not flow very well so it could be easy to miss one, but don’t. In the first gallery dinosaur fossils are laid out in sand pits and an audio guide tells you what they all are, where and how they were found. One was found 2014 by a family in one of the free fossicking sites outside town. Marine fossils are also on display. The second gallery houses fabulous fossils of whole fish and other marine specimens. The third gallery features a plesiosaur, one of the most complete vertebrate fossils in the world. This is awesome! The visit to Richmond completed the dinosaur story and answered my questions about some of the people involved in the Great Artesian Basin story.