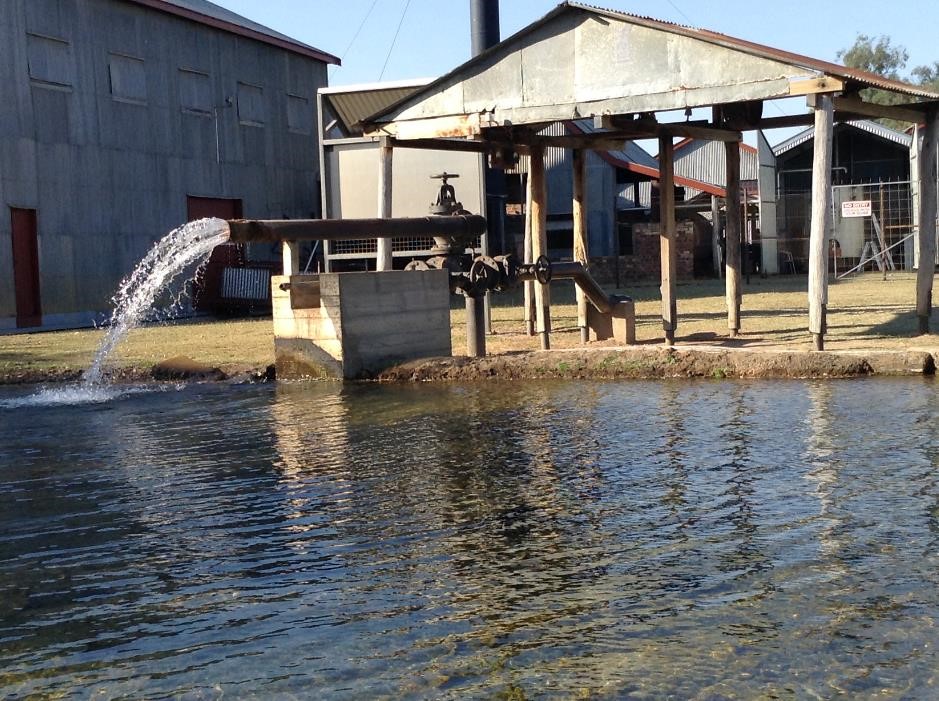 An early rise again this morning as a crowd gathered in the park opposite our motel. Over 50 horsemen and women wearing authentic Light Horse regalia, rode their whalers down the street and lined up outside the old railway station. They remained in place for over half an hour, while across the road in the park, people gathered to listen to speeches, prayers and both the New Zealand and Australian national anthems. The Kiwi anthem puts ours to shame as it was sung in both Maori and English. A procession of the Light Horse started in Barcaldine to celebrate the last cavalry charge at Beersheeba in Egypt in 1917. It moves on to Winton tomorrow.

The Stockman’s Hall of Fame was next on our list of things to do. Some of the exhibits were fantastic – the hawkers cart, the bullock wagon, a whip made by an aboriginal stockman but perhaps we are now over museums. Interesting story boards about people and places line the exhibition space but as it was crowded due to the beginning of the school holidays in Queensland, it was not the right atmosphere for reading and by the time we got there, we had already heard a lot of the stories. As we are not horsey people and have seen stockmen at other events, as well as riding around our place, we didn’t see the riding show.

We moved on to Ilfracombe and stopped to see the Machinery Mile – a large range of standing engines, graders etc along the highway. We missed going to the pub here but we were later told this is a good pub with money stuck to the ceiling.

We arrived at the Blackall Wool Scour just as a tour began. A scour washes the wool to reduce the weight for transportation. This was only possible in towns with lots of water. After artesian water was discovered, government bores were sunk in outback towns. Wool scouring became viable in these towns and as it employed many people, the towns grew. As the wool scour was unlike anything else we had seen, we really enjoyed the tour telling us the history and showing the scale of the machinery, the huge shearing shed and the bore.

The people of Blackall are very proud of the purity of their bore water and that it is free. This can be seen in the green lawns and lovely gardens, even in a drought. The Aquatic Centre with its artesian water was closing as we arrived at 5pm so we did not experience bathing in the hot artesian water.

We saw the piece of petrified wood, replacing the original Black Stump which had burnt. The Black Stump had been used in surveying the area. Anywhere west of it is referred to as beyond the Black Stump.

Back at our motel we talked to three people from various parts of Queensland and all believed the Great Artesian Basin is recharged by rain in New Guinea. They also believed that if it is valuable, dig it out. One guy had worked in the gas fields and was now working in a coal mine. When I asked about the water, he showed some concern as he had been at a coal mine when they hit an aquifer and water had run into the pit. He said, ’I suppose that was someone’s bore water.’